Minifantasy is one of the largest top-down fantasy asset collections out there, and definitely the largest at 8x8 res! It is perfect for prototyping or making polished games full of character.

Originally released in April 2020, it has been expanded with a new asset pack every month since then. Minifantasy will keep expanding with a constant stream of regular new content. 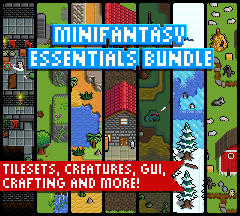 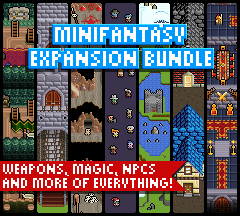 * Essentials Bundle and Expansion Bundle contains different packs. There are no repeated packs in those bundles.

** Complete Bundle contains all the assets in the collection, including the ones from Essentials Bundle and Expansion Bundle.

Do you want to try some of the packs in the collection first? Check out these Minifantasy FREE asset packs!

Welcome to Minifantasy - True Heroes, a new Minifantasy pack that introduces 3 of the most archetypal RPG heroes to the collection: the barbarian, the druid and the rogue.

The heroes have been designed to give each of them a unique feeling.

They include the six available animations in four directions that other Minifantasy characters have, which have been reworked to provide their own flavour to the heroes.

On top of that, each hero also includes a selection of class-exclusive animations specially designed to fit their respective roles.

What does this asset pack include?

The detailed list of animations each character include are as follows.

This guy is pure raw physical power. He was touched by a storm deity, which blesses him when he needs to protect his tribe from the evil forces.

After spending countless years as a hermit in the forest, the druid has learned to become one with it. The elemental power of nature allows him to shapeshift into magical forest creatures to enhance his abilities!

A cunning mobility master able to sneak behind the enemy lines to sabotage their plans for then escape before his foes can counter attack.

Do you like Minifantasy asset packs? Support me on Patreon!

If you want to influence Minifantasy direction, higher tiers also get:

By acquiring this asset pack:

a) Use all the assets included in this pack in your own non-commercial or commercial videogame or audio-visual digital project an unlimited number of times.

b) Edit and alter the assets included in this pack with the purpose of including them in your own non-commercial or commercial video game or audio-visual digital project.

a) Re-distribute or re-sell any of the assets included in this pack, or any altered versions of them, as games assets or images.

a) Credit me (Krishna Palacio) in your video game or audio-visual digital project credits.

b) Send me a link to the project upon completion.

In order to download this asset pack you must purchase it at or above the minimum price of $5.99 USD. You will get access to the following files:

Hi, I have one question before buying. do the hero characters have the farm animations and the craft animations or are these animations only for special npcs?

Unfortunately, the heroes don't include the farming/crafting animations. You can find the detailed list of animations that each hero has in the description below.

ok, and I cannot buy your assets via paypal, but I can buy other people's assets. I don't know why.

I hope you can make your assets on the Unity store as soon as possible.

as far as know people can buy Minifantasy assets using PayPal without a problem. Please, could you let me know the error message you get when you try buying the assets?

As for Unity, the whole Minifantasy collection is already being adapted to Unity (including some QOL features like basic rule tiles) but due to the size of the collection, it's taking time. Once it's ready, the Unity versions of every Minifantasy asset pack will be also accessible through Itch.io.

Hi. I purchased the complete bundle but I'm confused as to how to setup these characters. The sprite sheets have forward facing left/right and backwards facing left/right but there doesn't seem to be anything for up and down.

What do I use when moving down and wanting to attack down?

As an example, if your character moves towards E or SE, it will use the same animation. the same goes for W and SW. If you move straight south or north, it should use the animation row in the sprite sheet depending on what direction you were facing before going in the new direction (SW or SE for moving towards south / NW or NE for moving towards north).

If you want to see how directions work in-game, I recommend you check this out: https://www.talesofyore.com/?page=home (it's free and it makes a great example of how the assets can be used).

If you have any more questions or doubts feel free to contact me anytime, I will get back to you asap.

Thanks for getting back to me Krishna, really appreciate it.

This helps me understand better how it should work. I think the main thing that is throwing me off is the downwards attack animation for the special characters.

For example looking at the character here:

However for the special characters, there doesn't seem to be an effect that "hits" the ~190-340 range as all 4 attacking frames have the attack stop around the 180/90 degree line.

I guess I'll just have to set it up and see how it looks in practice but I am worried that it'll look really weird using the paladin attack if I'm walking downwards towards an enemy in the 230 degree range because it'll visually hit beside the character unlike the main character from the dungeon pack.

Unless I'm completely misunderstanding how this is supposed to be setup :)

Hey Naiyr! Answering you is part of my work :) so don't worry about asking me any doubts.

I completely understand your concerns about the attack directions. Minifantasy assets have been used successfully in a lot of projects, but every project is a world in itself and it's true that sometimes the assets may present some challenges to fit them in your vision depending on the type of game you guys are building.

because of the really low resolution, and the relative abstraction of the Minifantasy style, most action-based games made with Minifantasy assets work just fine (there are top-down ARPG Minifantasy projects that only use the front views of the character animations that work very well and fluidly). However, I can see how it may be a problem depending on how you gonna implement your game systems.

There are some weapons and special attacks that have pure N-S-E-W directions. You can find them in these packs: Weapons, Magic And Sorcery and Magic Weapons And Effects.

I hope the assets can find their place in your project :) You know you can contact me anytime if you have further questions or if you need some directions.

thanks again! You’re right once I get it setup the size of the characters make it look totally fine :)

I'm glad to know finally the characters fit your project  :)

As for your question, there are a lot of animations only available for the base humanoid races: human, elf, orc, halfling, goblin and dwarf (the naked versions you can find in Minifantasy - Creatures). Some of these expanded animations for the base characters are the ones in Weapons, Magic And Sorcery or the Crafting And Professions packs. I often introduce new animations for these 6 humanoid characters in new asset packs.

If you want the heroes or other creatures to be able to cast additional spells, use the fishing rod, or attack with different weapons, you will need to make some edits yourself using one of the base humanoids as a template.

Minifantasy is an ever-growing asset collection that keeps adding new stuff every month, the increasing amount of animations for the base characters makes it impossible to have those additional animations also available for special characters and other creatures in the collection (right now we have over 100 different creatures between the ones in the assets packs and the ones in the Patreon archive, and counting). I would need to retrospectively update every character to include an always-increasing number of new animations, which would lead me to invest all my time in updating the already existing creatures instead of making new content for the collection. so I'm afraid this is the downside trade-off in exchange for having such an expansive collection.

I'm sorry for the inconvenience it may cause 🙏

Hey Krishna! I purchased the complete bundle and love these assets! I'm wondering if you have any plans for more true heroes or classes in the future? I'd love to see more classic heroes like a wizard, knight, etc. Excellent work either way!

Thanks for supporting my work Sgiampa! I'm very happy you like the collection.

The direction of Minifantasy Collection is 100% in the hands of my Patrons. Every month, the Patreon community suggest themes and ideas for new packs. Then, those suggestions are voted in a poll. The most voted theme wins and I make a new asset pack.

Answering your question, I can't guarantee when a new Heroes pack will be made, but I know that in the community there is interest in more classes. I'm quite sure rather sooner than later this will be something arriving at the collection :)

These characters instantly sparked a game idea about the holy trinity. Thanks for the art! However, I have already bought the minifantasy bundle and these assets aren't included in my link. I reset it but nothings changed. Any idea how I can get the pack to load in the bundle?

My guess is that the True Heroes asset pack was probably released in a later date to your Bundle purchase.

ah ok i'll be buying this then

I want to remind you that if you joining my Patreon you will get 50% discounts on individual packs along with access to all new Minifantasy asset packs and many exclusive Minifantasy sprites :)

I was actually going to get the Orc tier in a weeks time (next Saturday or Sunday) so that's exciting!

Nice ^^ Thanks a lot for the support